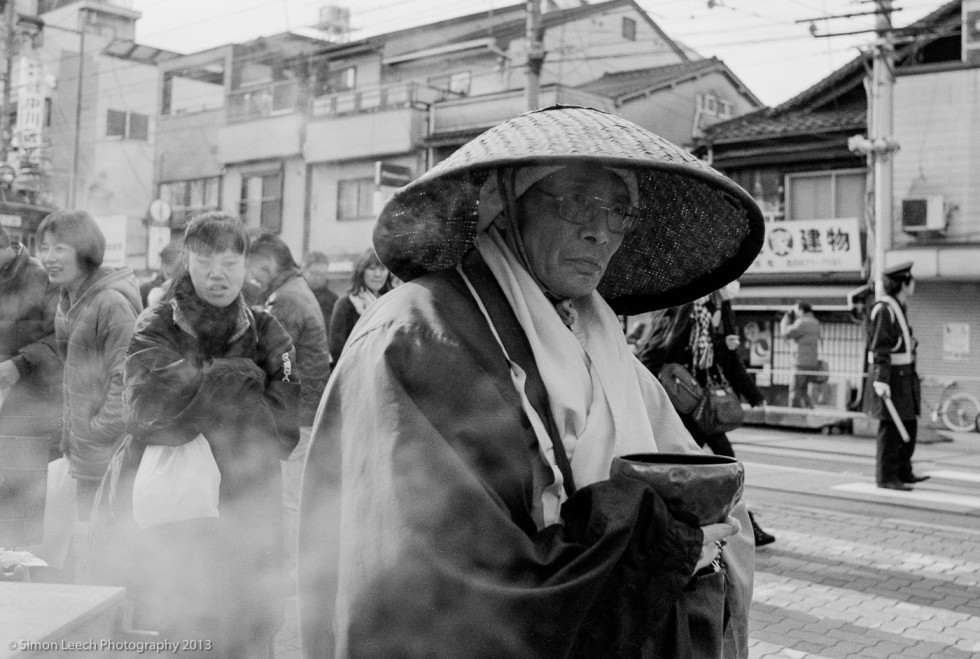 I began ‘serious’ photography back at university, when digital was only just getting going. At the time I didn’t have much money, so scrimped and saved to buy myself a semi decent analogue camera kit based around the Nikon F601. I was the picture editor/photographer for the college paper, so ended up spending a fair amount in the darkroom, mostly against a deadline, getting my black and white films developed and printed for inclusion in the following issue. As time went by and I got a reasonably paying job, I was able to upgrade the film gear to a Nikon D70, one of the earlier Nikon digital cameras, and I haven’t looked back since, progressing through the various models in the Nikon family up to the D800 that I have today.

Whilst the Nikon gives truly excellent image quality, there is one thing that frequently frustrates me – carrying a D800 with one or other of the pro lenses I own is just not a compact solution. Especially when walking around on a trip with my family, the camera stays in the bag to avoid getting in the way whilst pushing the pushchair or carrying my daughter. So at the end of 2012, and with an upcoming trip to Japan being planned, I decided to take a step backwards in terms of technological progression, and bought myself a film camera. But not just any film camera – my intention was that the chosen platform would be compact, simple, expandable, a pleasure to use, and above all something that I could slip under my jacket or into my laptop case when I want to travel light. 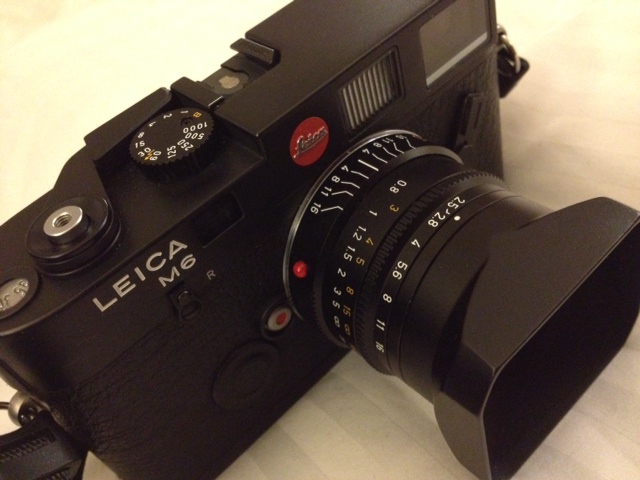 Of course, I could have found myself any number of digital (compact) cameras that would have fulfilled some or all of those criteria, but I wanted something a bit different. Something that would make me stop and think before pressing the shutter button, to avoid returning home with hundreds of shots and having to sort through 10 of the same shot, looking for the one with the perfect smile or ultimate sharpness in the subject’s eye. My thought was that if I only had 24 or 36 shots per roll, this wouldn’t be an issue.

Researching beforehand on the internet I realised that there was still quite a following for various film models, even though the selection of films and the number of locations to get the films developed is reducing year over year. I’d previously toyed with the idea of buying myself a Leica digital rangefinder, so, with this in mind as a potential future upgrade path, I decided to look at the Leica film rangefinder cameras as a possible solution. One of the main advantages of the Leica rangefinder platform (the M system) is that all of the lenses that have been produced for the range of Ms, from the M1 to the latest M9 or MM cameras, are backwards compatible. There’s no problem about lenses not working with the latest AF system or not being able to stop down automatically – everything in the Leica world is manual, including focus and aperture control. 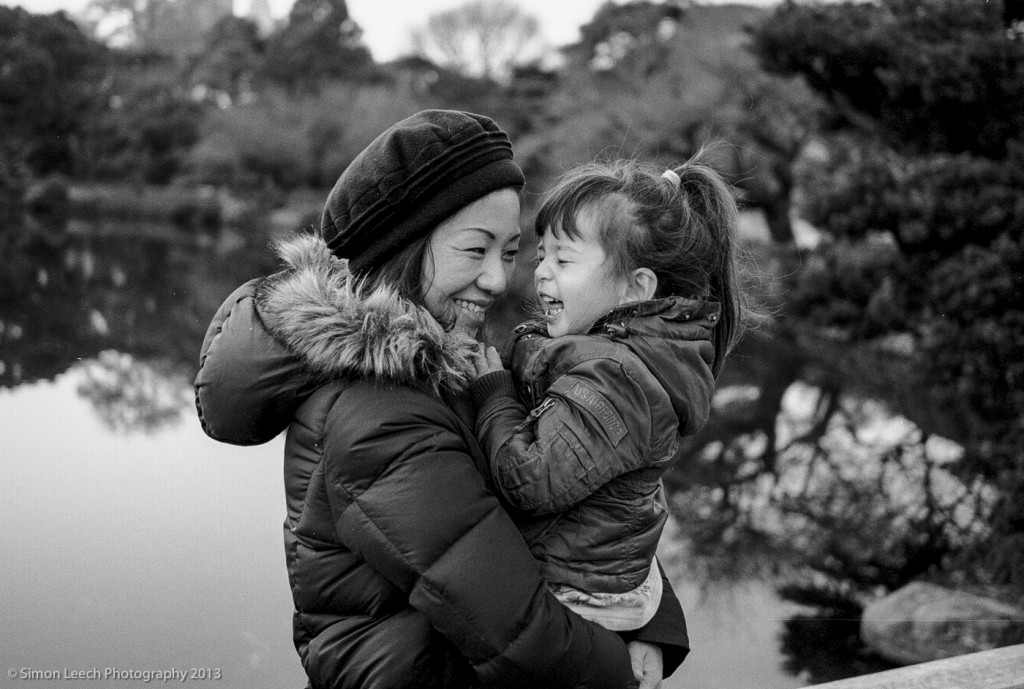 Japan is a haven for secondhand Leica, at least in terms of second hand selection – one of the the store salesmen told me that many elderly Japanese had invested in Leica years ago, and were now offloading their gear to second hand camera stores on a consignment basis to get some money for retirement. My plan was to pick up both a camera and lens whilst we were in Tokyo for 5 days over Christmas, preferably on the first day, so that I could then spend the rest of the two week holiday using the camera and getting to know it. However, as luck would have it, I got a good deal on a Leica 35mm Summarit lens that I was bidding on on eBay, and picked that up a couple of days before I was due to depart from a seller in Belgium. The Summarit range of lenses are newer to the Leica range, introduced as a low cost (in Leica terms) alternative to the more expensive Summicron and Summilux lenses. It boasts a maximum aperture of f/2.5, and various Leica aficionados on the net rate them very highly, so it seemed like a sensible option. Ultimately, if I didn’t get on with the lens I would be able to sell it on to someone else for pretty much the same as I had paid, so it felt like a safe bet.

So I set off to Japan with just a lens and no camera, and a list of addresses to visit. (Actually, that’s a slight lie as I did have my Panasonic Lumix with me as a backup, but ended up not using it).

We were staying in the Shinjuku area, which is well known for it’s abundance of second hand camera shops, and, along with Ginza, is one of the better locations to head to if you are looking for something new or not so new. The evening of the day we arrived, I went for a walk around and started to look at my options. 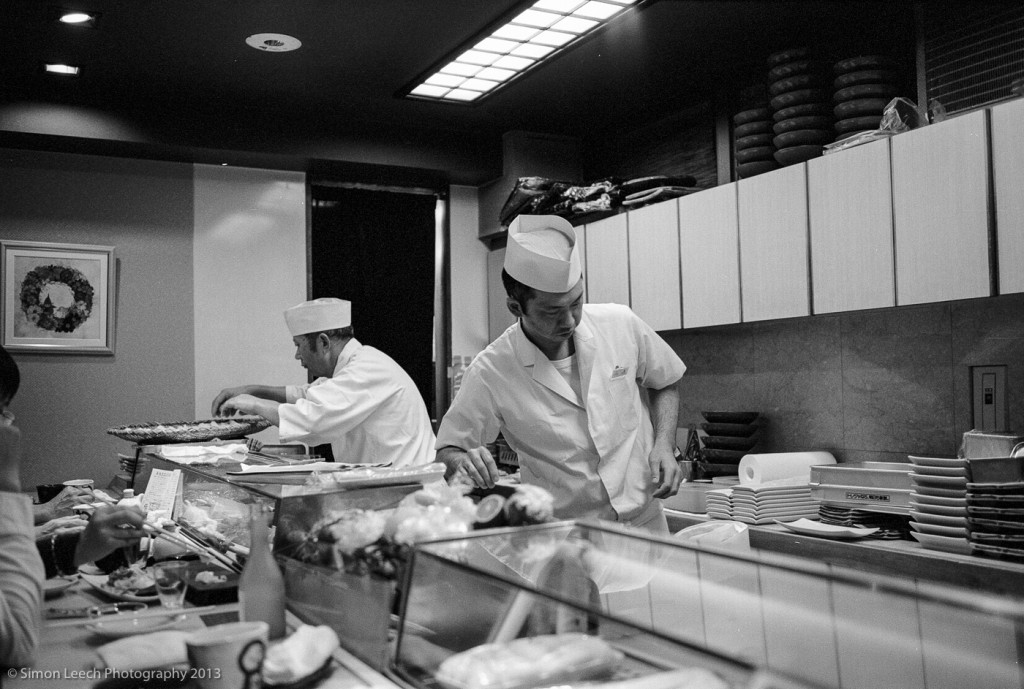 As I mentioned earlier, Tokyo has a fine selection of (preowned) gear from all of the main camera manufacturers. Whilst the prices aren’t necessarily the lowest in the world due to the current exchange rate, this is made up for by the choice that a prospective buyer has. I had researched the various stores before hand and had an idea of where I would be going, based upon the great buyer’s guide by Bellamy at Japan Camera Hunter. I started wandering round the stores looking at row upon row of well cared for, and, in most cases, mint condition, M bodies. I already knew that I would be looking for a Leica M6 0.72x body, so that was my main target. After looking round various stores, I stumbled across Lemon Camera, and found what I was looking for – a boxed, as new condition M6, complete with the original box, strap, and paperwork. Even had the warranty card included, although this had long expired since the camera dates back to 1993. Luckily the guy in the shop spoke pretty good English, so we had a nice conversation whilst he let me test all the usual stuff when buying a second hand camera (if you’re in the market, check CameraQuest’s checklist before you buy), and I had made my decision. 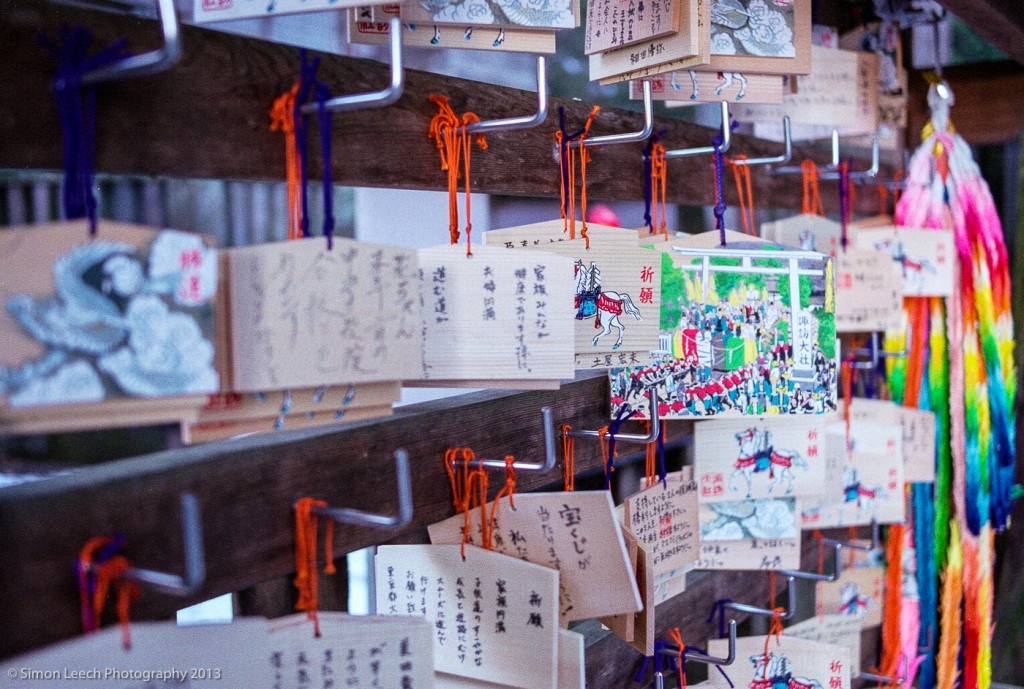 Lemon Camera seems to be a really good shop and well worth a visit if you are in Tokyo. Most of the gear they sell is done so on consignment – meaning that the price is set by the owner, and then the shop adds 10-20% to the price and takes on the responsibility of selling the gear. This means that you typically receive the product with no right of return, and no warranty, although I was lucky that this particular camera was not being sold on consignment, but instead by the shop themselves. They had fully tested it and were even prepared to offer a 6 month warranty against failure (not that the older mechanical Leica’s ever seem to have problems, according to what I have read). I would never be able to use the warranty as I would be taking the camera back to the Netherlands, however it was a good piece of mind to have that the shop was prepared to stand by the condition of the camera. Lemon’s shop in Shinjuku is fairly small, but they have a much larger store in Ginza. I stopped in there later in the week, and as luck would have it was approached by the same guy who had dealt with me in Shinjuku when I purchased the M6, and he helped me choose a very nice Artisan and Artist leather half case for the camera. The Ginza store had over 20 M6 to choose from, as well as a similar number of M4, M5, and M7 bodies. Also a number of rarer lenses, such as not one but two copies of the revered Noctilux 50mm f/1.0 lens, although that is way out of my budget for now….. 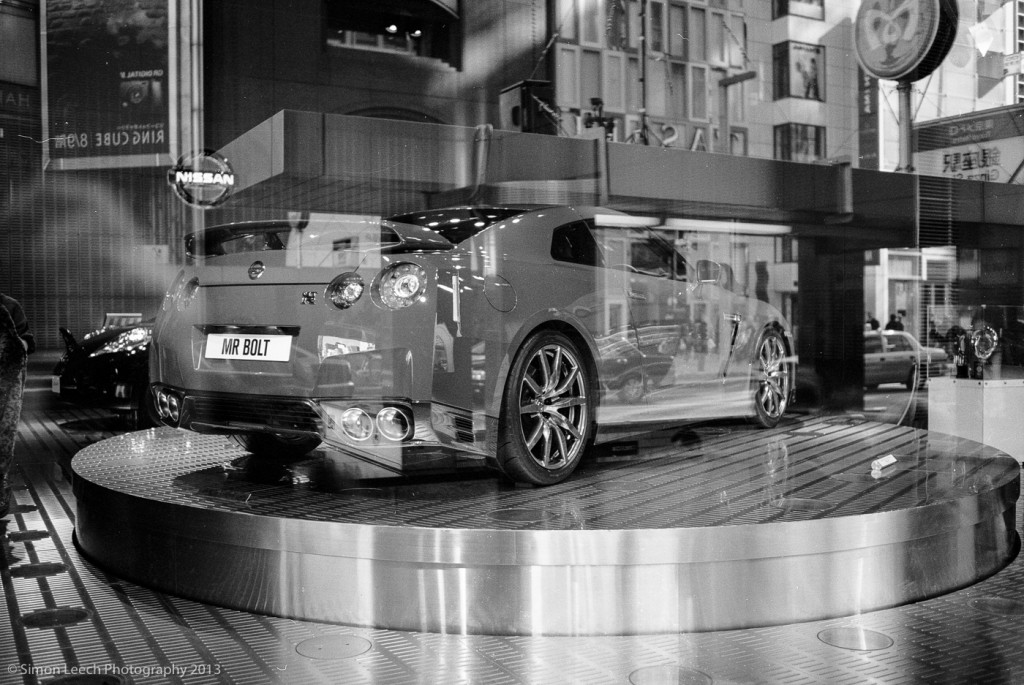 My first impressions with the camera are very positive. Every aspect of the camera is a joy to use, from loading the film, to winding on in between exposures, to the flexibility that shooting with a fully manual camera provides. I found that people generally ignore me with the camera due to the discrete form factor, which is a welcome change compared to the angry stares you get if you hold a D3 with a 24-70mm in someone’s face to take their photo. I’ll certainly be writing more about my experiences with the camera in a future blog post, so, for now, stay tuned! 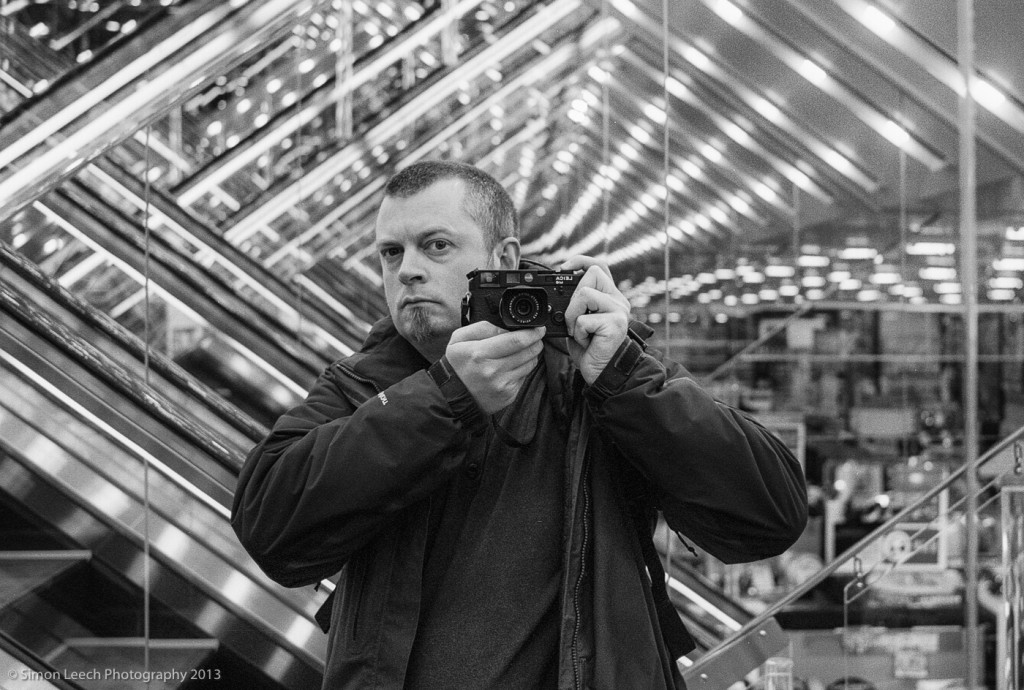