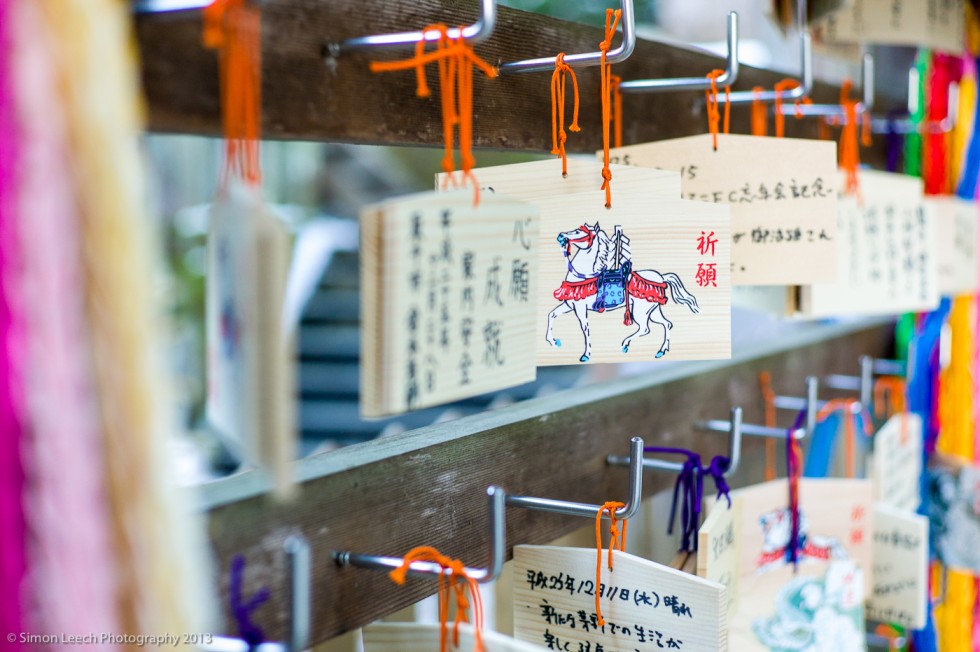 My final trip for 2013 was to Japan. We set off on the day after Christmas, and spent the New Year holiday there, returning in the first week of January. The plan was to spend a couple of nights in Tokyo, then spend New Year in Nagano Prefecture, and then return to Tokyo for the last couple of nights. Although Tokyo is quite an expensive city to spend any time in, I had saved up enough KLM miles to pay for three flights, and was also able to use various hotel points to cover some nights in the hotels. That just left the food and living expenses to cover, and although Tokyo has a reputation for very expensive restaurants, it’s just as easy to find cheap (and good) places to eat as well. 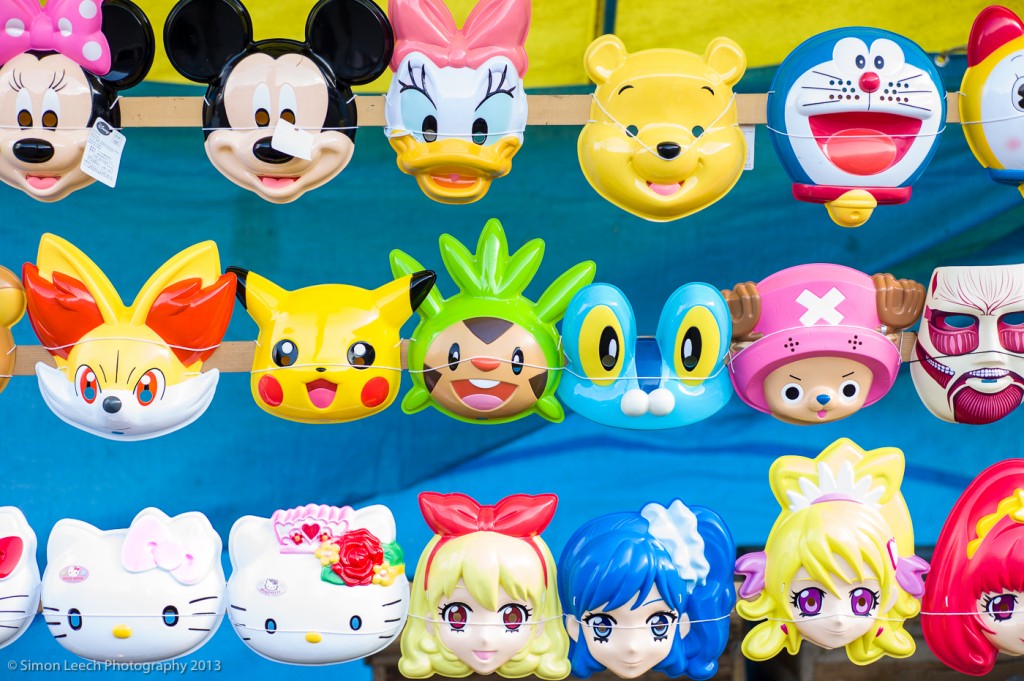 Face masks depicting a mix of Western and Far Eastern children’s characters. Around the New Year period there are many street markets selling this sort of thing

Tokyo offers a number of opportunities to the photographic visitor. First of all there, is a great selection of second hand camera stores there, as discussed during Chapter One. At the time of the trip I was pretty sorted for camera equipment, so didn’t have any intention of spending too much money in any of the gear shops (although I wouldn’t have minded picking up a 50mm Summilux Pre-ASPH, if I could have found one), but I would be lying if I said I hadn’t checked some of them out 🙂 But I got away fairly lightly, and all I bought was the excellent Artisan and Artist braided silk cord strap for the M-E, which offers a really nice solution for carrying the camera. 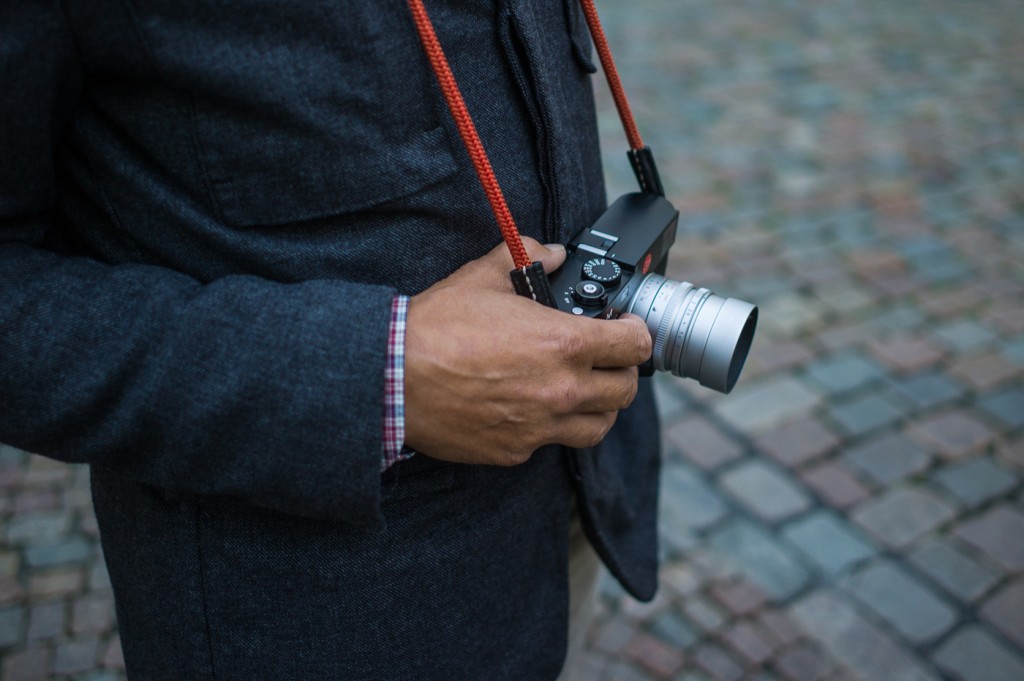 Artisan and Artist Cord Strap, being modelled by Lars on a Leica M at the recent Leica One event in Wetzlar

Unlike normal leather straps, which tend to get twisted and tangled when you wrap them around your wrist, the A&A strap wraps well and doesn’t tangle due to the cylindrical construction of the threads. Being a Japanese product, it is also a lot cheaper to buy in Japan, and only cost me around half of what the same strap would have cost in the Netherlands. 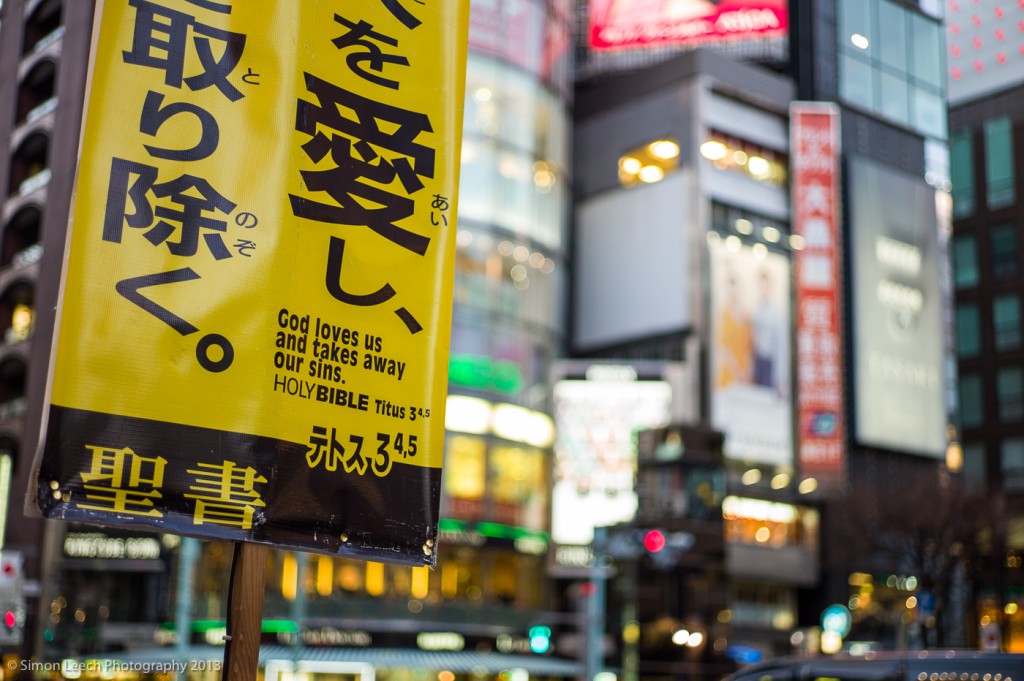 God Loves Us…. even when you are parading the over priced streets in the Ginza district

So, since my gear lust was easily solved, I turned my attention to the other major attraction for photographers in Tokyo: Photography itself! Tokyo is a bustling metropolis, and there is always something happening and something to see. Also the Japanese tend not to worry, and in fact seem to enjoy, when people are taking their photographs, so it makes it a very easy location to do street photography. I’ve been to Tokyo a number of times now, but there are still many regions that I have yet to discover, so I visited a combination of new and old places, and tried to shoot photos that combined the culture that Tokyo has, together with the people that live there. 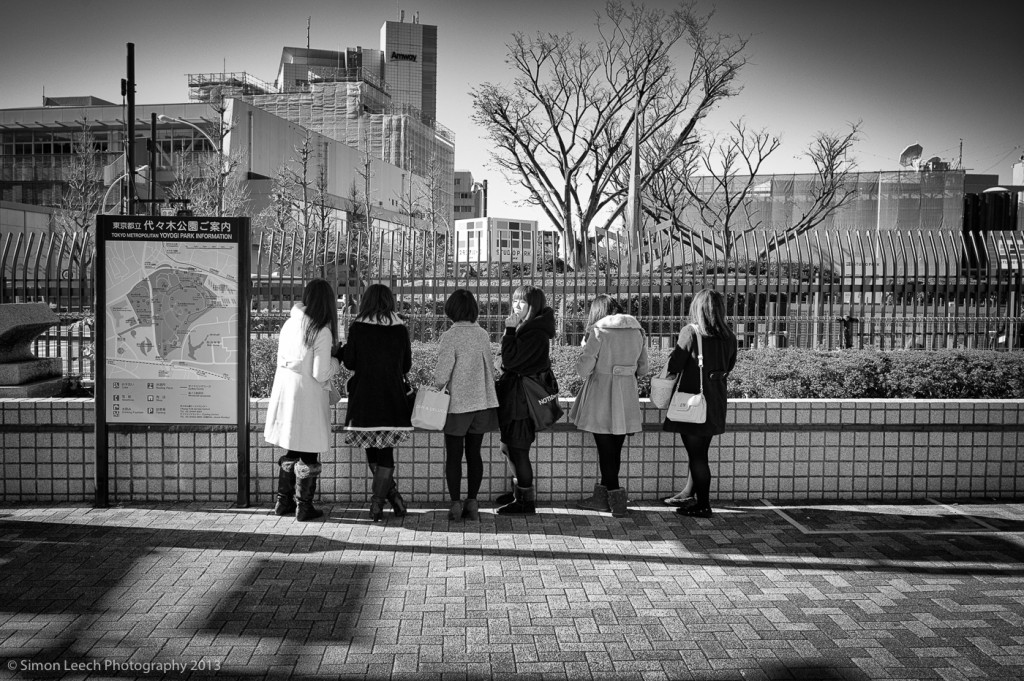 Waiting outside the NHK Studios in Yoyogi Park, Shibuya, Tokyo on a Sunday morning. NHK is the Japanese national broadcaster, and presumably they were waiting for the arrival of the latest Japanese teenage heart throb…..

The first Sunday in town I decided to spend some of my time around the Yoyogi Park and Harajuku areas. This park connects Shibuya to the Meiji Jingu Shrine and Harajuku district, and is full of runners and walkers wishing to escape the hustle and bustle of the Tokyo streets. I was hoping to be able to find some of the world famous ‘Harajuku girls’, but there were very few around. Asking around suggested that the Harajuku area was no longer as fashionable as it was in the past, and the girls had moved on elsewhere. 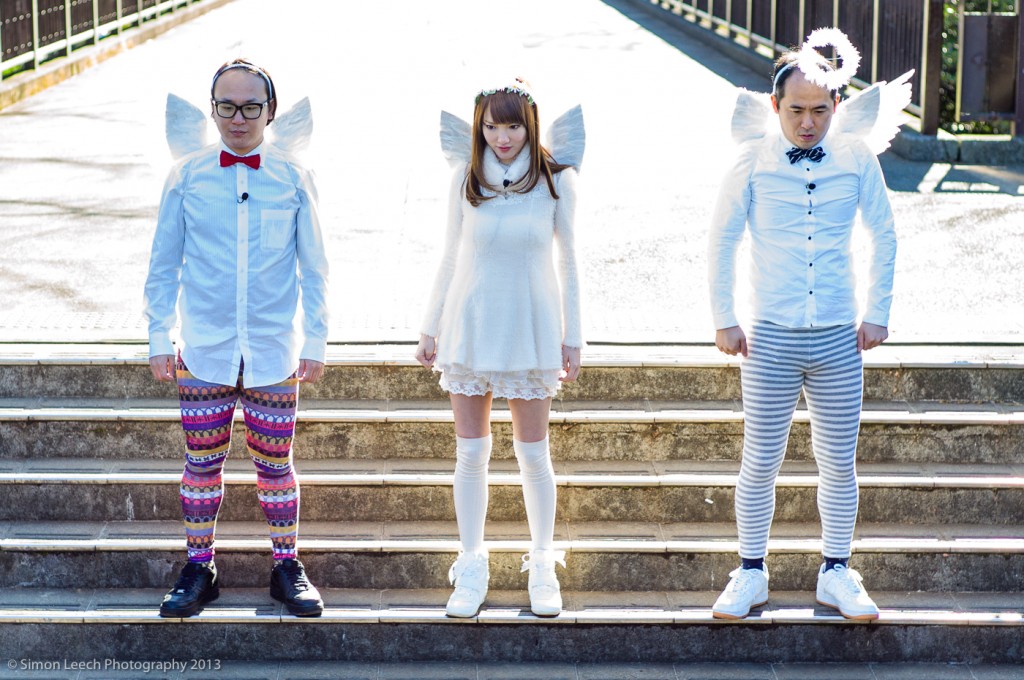 Angels on a Bridge. Because sometimes you just have to dress up as an angel. And stand on a bridge. 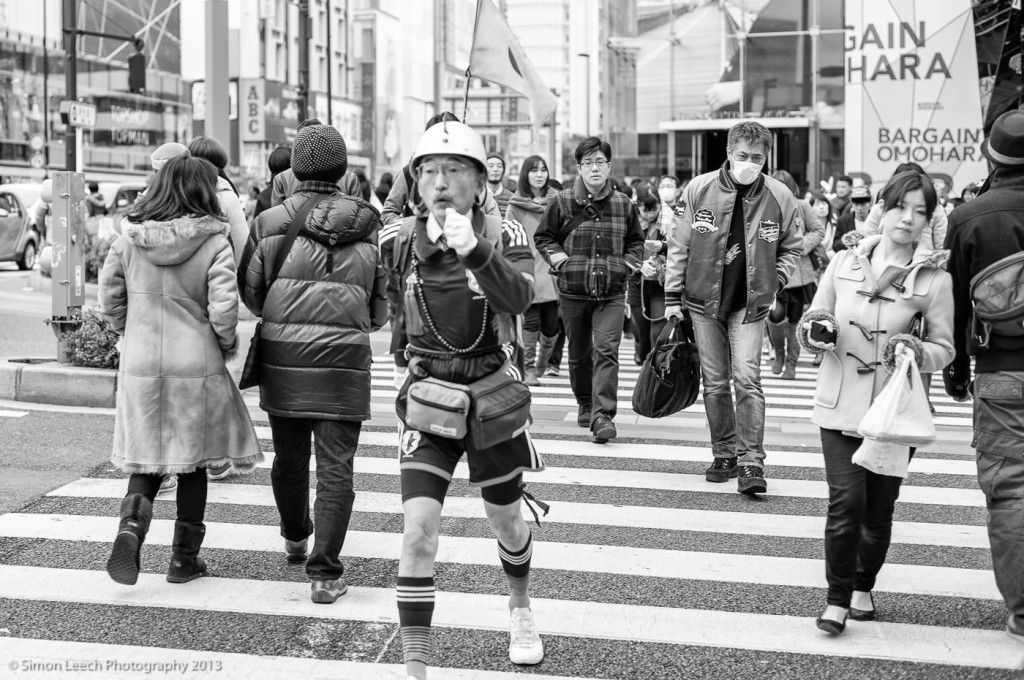 Saving the world, one step at a time. You meet some odd people in Tokyo. He was a quick chap. Completely missed my focus….. 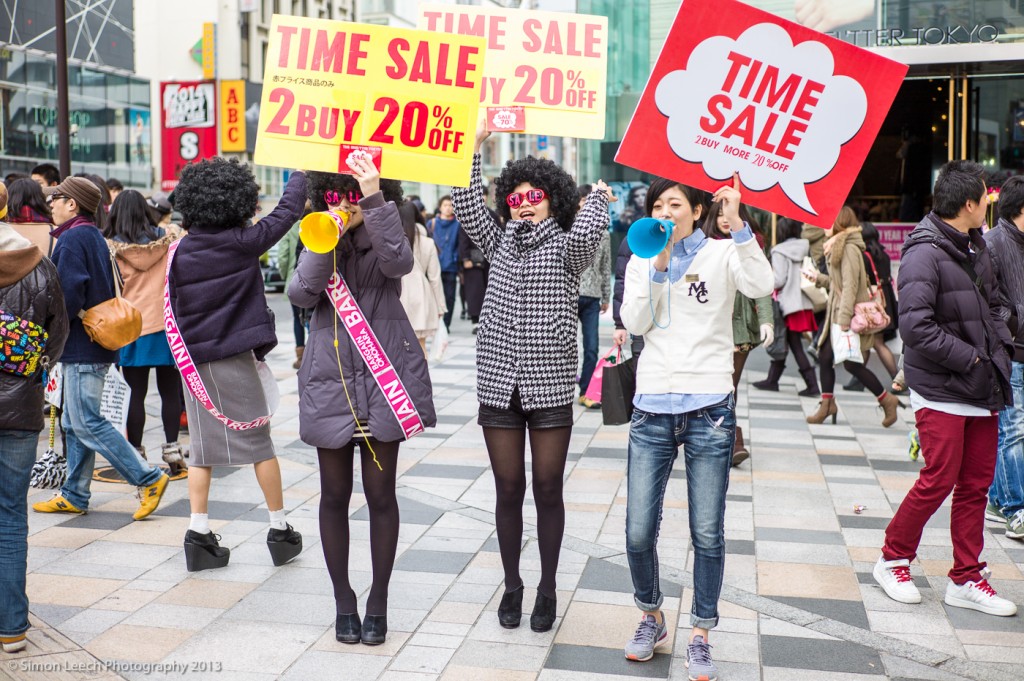 There we are, a couple of Harajuku girls to end the post. We tried to ask them if they were dressed like that to meet with other friends, but they looked at us with surprise and told us they just liked to dress like that……. 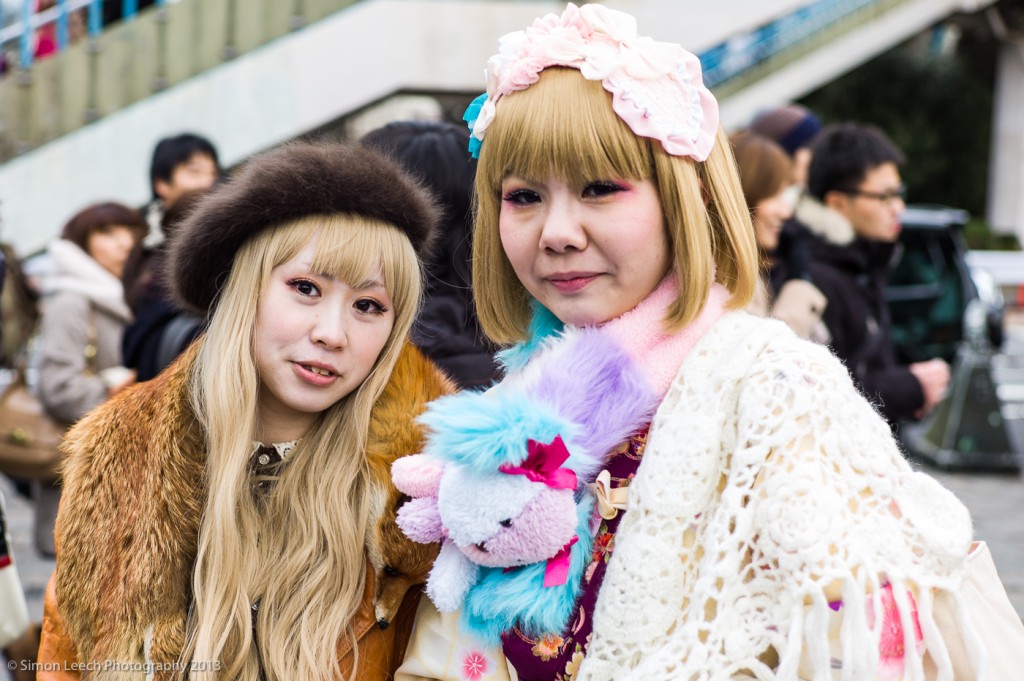